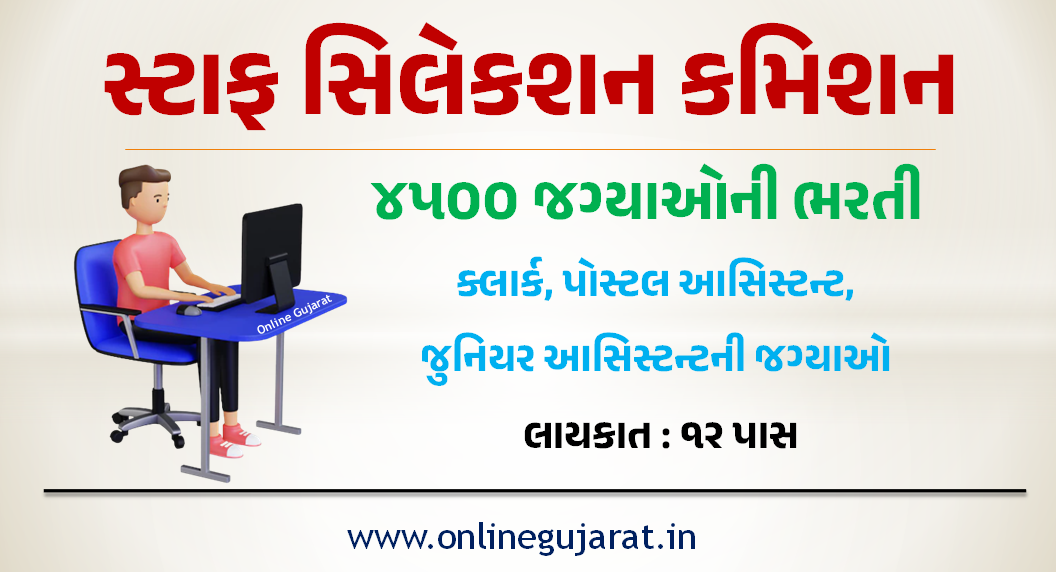 SSC CHSL recruitment 2022 : Staff Selection Commission has released SSC CHSL 2022 Notification PDF for around 4500 vacancies on 06th December 2022 along with online registration dates and revised selection process. SSC CHSL is a national-level government exam conducted every year by the Staff Selection Commission to select Higher Secondary qualified students for various departments and offices of the Indian government. Every year thousands of vacancies are filled by SSC in Government departments through SSC CHSL Exam and lakhs of candidates apply for this exam. The SSC CHSL will be conducted for the recruitment of eligible candidates in different government departments, offices and ministries for different posts like Lower Divisional Clerk (LDC), Junior Secretariat Assistant (JSA), Postal Assistants(PA), Sorting Assistants(SA), Data Entry Operator (DEO), Data Entry Operator Grade A across ministries and government offices.

Staff Selection Commission conducts Combined Higher Secondary Level Exam every year for various subordinate services. For FY 2022-23, SSC CHSL Notification 2022 has been released along with all important details about the exam on 06th December 2022. Check further details below table-

The schedule for the SSC CHSL 2022 exam has been published by SSC along with its Official SSC Exam Calendar 2022. The SSC CHSL 2022 Online Registration is to be commenced from 06th December 2022 along with the release of SSC CHSL Notification 2022 and will continue till 04th January 2023. Please note down the important dates related to SSC CHSL 2022 Exam:

SSC CHSL (10+2) exam includes Lower Division Clerk, Junior Secretariat Assistant, Postal Assistant, Sorting Assistant, and Data Entry Operator posts. SSC will select and recommend candidates for Assistants / Clerks posts through a computer-based test, descriptive paper, and skill test, or typing test. The SSC CHSL exam is held in 2 stages called (Tiers). The entire process of registration and communication happens online through the official website of SSC CHSL. Candidates must qualify for each stage of the SSC CHSL exam to proceed to the next one, before being finally selected. SSC has released the SSC Calendar 2022 for all SSC exams.

With SSC CHSL Notification 2022, approx. 4500 vacancies have been announced, the exact number o f vacancies and details will be announced shortly. SSC will release a notice regarding SSC CHSL 2022 vacancy soon. Last Year, SSC introduced 4893 vacancies. The Post wise vacancy are mentioned below:

• Exemption: No fee is required to be paid by female, SC, ST, Physically Handicapped, and Ex-Servicemen candidates.

• Applications fee should be paid only through SBI either in the form of challan or through SBI Net Banking or any other bank Credit/Debit Card. The Challan form will be generated online.

• To pay a fee in cash, the candidate should take a printout of the challan generated online after the completion of Part-1 registration. Deposit the requisite fee in any branch of SBI and then continue with the Part-2 registration.

There are 3 important eligibility criteria that a candidate must fulfil in order to be eligible for the SSC CHSL 2022 exam. The 3 parameters are given below:

A candidate must be either:

For LDC/ JSA, PA/ SA, DEO (except DEOs in C&AG): The candidates who are planning to appear in CHSL 2022 exam must have passed the 12th Standard or equivalent examination from a recognized Board or University.
For Data Entry Operator (DEO) in the Office of Comptroller and Auditor General of India (C&AG): 12th Standard pass in Science stream with Mathematics as a subject from a recognized Board or equivalent.

The online application form link has been made available at the official website of SSC i.e. https://ssc.nic.in/ from 06th December 2022 onwards. The Official SSC CHSL Registration link has been mentioned below as the link is now activated officially. The candidates can click on the direct SSC CHSL Apply Online link and begin with the SSC CHSL Registration Process without any delay. The last date to submit SSC CHSL Application form is 04th January 2023 (11 pm).

Before beginning the SSC CHSL preparation, it is important to make note of changes in the exam pattern and syllabus. The modifications to SSC CHSL Exam Pattern 2022 are given below:

• Introduction of a descriptive paper of 100 marks within 60 minutes in pen and paper mode.

• Reduction in the time limit for examination of Tier -I from 75 minutes to 60 minutes.

• Tier-II will include following three sections having two modules each

Since the SSC CHSL is comprised of 3 different levels, we must deal with their syllabus independently.

This is an objective exam that will be conducted online. There are 4 sections in the Tier 1 exam of SSC CHSL 2022, with 100 questions that account for a total of 200 marks. The subject-wise details are given below:

Geometry: Familiarity with elementary geometric figures and facts: Triangle and its various kinds of centres, Congruence and similarity of triangles, Circle and its chords, tangents, angles subtended by chords of a circle, common tangents to two or more circles.

General Awareness: Questions are designed to test the candidate‟s general awareness of the environment around him and its application to society. Questions are also designed to test knowledge of current events and of such matters of everyday observation and experience in their scientific aspect as may be expected of an educated person. The test will also include questions relating to India and its neighbouring countries especially pertaining to History, Culture, Geography, Economic Scene, General policy and scientific research

• There is negative marking in SSC CHSL 2022 Tier 1 Exam. Giving a wrong answer to a question will lead to a penalty of 0.5 marks in all sections

• The exam duration is 75 minutes for candidates who are visually handicapped.

This is a descriptive exam that is designed to test the written skills of the candidates in English/Hindi. The Paper would comprise writing of an Essay of 200-250 words and Letter/Application writing of approximately 150-200 words. The minimum qualifying marks in Tier-II would be 33 per cent. The performance in Tier-II would be included for preparing merit. The best way to prepare for the same is to read lots of articles from various newspapers. Apart from this, you need to be well aware of the pattern of Letters and Applications.

The salary structure for different posts under the SSC Combined Higher Secondary Level exam is given below: